Ryan G. Hinds’ final “Coffee Talk” cabaret was a huge success, and an absolute blast to be involved in. We had a wonderful welcoming crowd, the serving staff were wonderful and the food was delicious! The Flying Beaver Pubaret is a sweet little bar, one side of it is a typical local pub and the other side has a stage and cabaret feel to it. Very adorable!

The show started with a bang, the fabulous Ryan G. Hinds sang “Bring on the Men” from the musical Jekyll and Hyde. 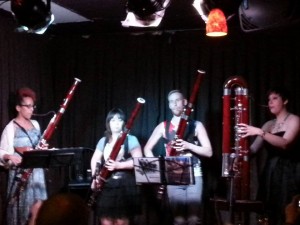 Next up was Wrong Note Rusty, a member of Boylesque Toronto. He did a raucous routine to the classic “Stars and Stripes Forever” with his trusty trombone, lots of hot slide action (thank goodness for slide grease) and a slowly diminishing marching band uniform. If it weren’t for his strategically placed trombone bell…

Then was Jory Rossiter who thrilled the crowd with some classic Sinatra-style crooning. He had a gorgeous voice and a charming presence on the stage. He was great to watch, and fun to hang out with before the show!

Then it was our turn. Our little set was the 80s, 90s and aughts… Susan’s arrangement of Africa by Toto, followed by Nirvana’s Smells Like Teen Spirit and Toxic by Britney, both arranged by the lovely Catherine Magowan.  Since we brought the raucous members of our fan club, we were able to squeeze in an encore and rocked out to Catherine’s arrangement of Ob La Di by the Beatles.

It was a complete blast to play at the very last Coffee Talk. Ryan G. Hinds puts together a fun night of entertainment, and by interviewing the artists, he creates an intimate get-to-know-you atmosphere that is really unique and special. Sadly, Coffee Talk is now retired, but stay tuned for some exciting news about future collaborations with Ryan! No, seriously, this is such cool news, but we’re just not allowed to share it yet… 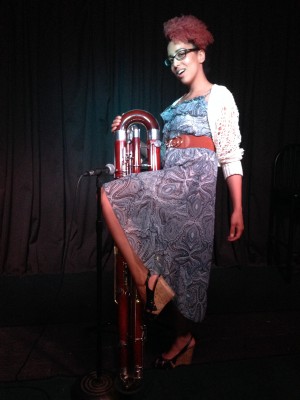 Sheba gets a little frisky with the contra

Also, a big thank-you to Sheba Thibideau who did an amazing job filling in to complete the quartet as Graham, sadly, had another show that night…(the lives of musicians!)

And we would be remiss if we did not give a special shout-out to sound guy Robert, who did not blink an eye when we walked in the door with among the most difficult instruments to mic, and was very attentive and observant in our sound check! Also huge thanks to co-owner Heather and her staff for making us feel very welcome. We should also mention that the other co-owner Maggie, who manages bookings, reached out to us shortly after the show, and we should be able to make another announcement in the next while!